Regular readers of this blog will have realised by now that Dungeons and Dragons is my first role-playing game love. You will also know that I consider 5th Edition to be the best edition of the game bar none.

That said though, I’m not immune to the affections of other d20 games, particularly those sibling games in the D&D family tree. Of all of these, the one which I like the most is 13th Age.

The product quality is amazing. Both the Core Rulebook and 13 True Ways (the two core rule books) are absolutely stunning as are both the Bestiary and Bestiary 2 volumes (which I’m proud to be named inside as a backer). 13th Age is designed by Jonathan Tweet and Rob Heinsoo who worked on 3rd and 4th Edition D&D respectively so they know their stuff, and 13th Age feels a lot of the time like a middle ground between those two editions. 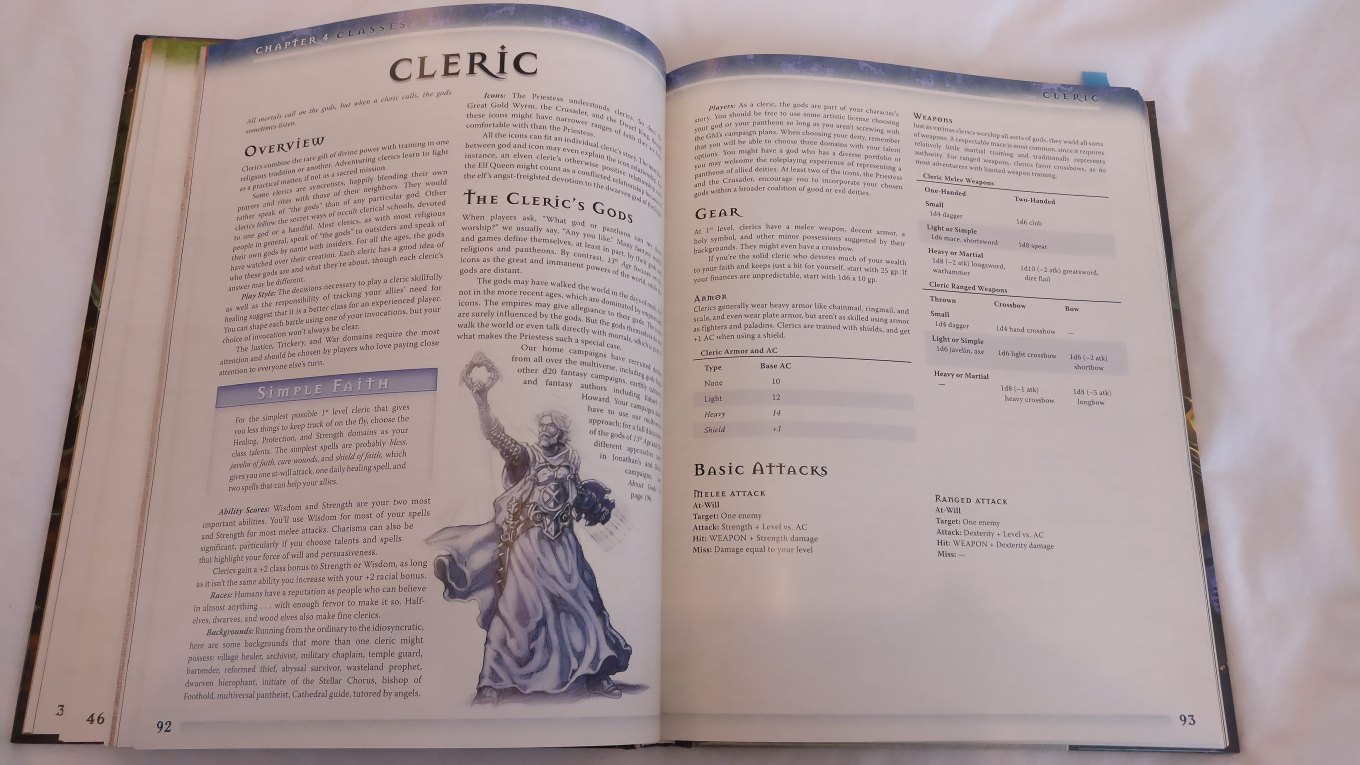 Importantly for me, 13th Age is still recognisably Dungeons and Dragons, which is the main reason I’m drawn to it. The usual six attributes of Strength, Constitution, Dexterity, Intelligence, Wisdom and Charisma are in use as well as familiar concepts like Hit Points, Armour Class and the separation of Race and Class when creating characters. It’s still ultimately a European, Medieval setting with Orcs, Dragons and Goblins.

At first glance, character creation is very similar, although it’s immediately clear that 1st Level characters in 13th Age are slightly sturdier than their 5th Edition equivalent with more hit points and much more powerful basic skills. Your characters are no farm hands setting out on the path to adventure. They are already established heroes who stand out from the crowd.

Some of the more intricate parts of D&D such as Armour Class and weapon damage are simplified (AC and weapon damage is now determined by your class) and to be honest, once you are used to it you almost immediately stop noticing it. It’s really a simplified approach which somehow doesn’t impact the gameplay at all. There are also some other differences to damage calculations (you can do damage even on a miss for instance).

The three main differences from D&D though are the ‘One Unique Thing’ system, the ‘escalation die’ and the concept of ‘Icons’ – powerful NPCs in the world whom the party members are connected to, either positively or negatively. These ‘Icon Relationships’ can be leveraged via successful dice rolls and can then be used by the GM to influence the storyline or give characters boons and benefits. For example, characters aligned to the Emperor may suddenly find assistance in the most unlikely of places.

Sadly, the ‘Icon Relationships’ concept is poorly explained and at best is easily ignored by GMs or at worst can create a total headache for the GM who has to try and squeeze multiple icon benefits into the session, creating a lot of additional work for the GM.

The escalation die is an increasing bonus to the players (not the monsters) starting from round 2 of any combat. The die starts at 1 and increases to a maximum of 6 and players add that value on to their attack rolls. Usually it’s represented on the table by an oversized d6. It’s a remarkably simple addition which greatly speeds up combat.

Similarly, the One Unique Thing concept is a delight. Players specify one unique thing about their character. It can’t have a mechanical in game benefit but it’s a huge boost to roleplaying. One of the examples quoted in the core rulebook is “I am a deathless pirate whose soul is trapped in a gem controlled by the Blue Dragon”. I mean, does it get any better than that?

Some other aspects of the 13th Age system are clunky and unclear. There is no clear level up path and no XP for instance, just a suggestion of levelling up every few battles. Ultimately this is no different from the current trend for milestone levelling but even so, it feels poorly explained and arbitrary.

Monsters do fixed amounts of damage which initially seems like a Brucey bonus for the GM at first, given it reduces the amount of dice rolling, until you realise that the players can ultimately use that fixed damage to metagame.

The system overall though is appealing and I love to GM it. I’ve previously blogged about the beautiful campaign book Eyes of the Stone Thief and I have an ambition to run it one of these days. Until then, I’ll throw in the occasional 13th Age one shot and enjoy the system for what it is – a slightly brilliant but also slightly flawed iteration of Dungeons and Dragons that does many things right and allows players to create epic stories.

Inside the Tower of Dust